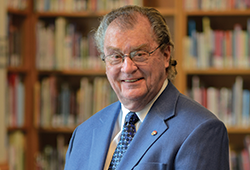 Since graduating with a degree in music education from Lebanon Valley College, Gerald "Jerry" S. Wingenroth '58 has chosen to support all things music at The Valley, and for good reason. Jerry devoted his entire professional and personal life to sharing the joys of music. That includes helping to ensure future generations of LVC music majors will find the same success he has.

"I am very thankful for the excellent education I received at Lebanon Valley College," he said. "There is something to be said about the talents and dedication of our professors. I am pleased to have my earning power come back to LVC."

Jerry has established The Gerald S. Wingenroth '58 Endowed Scholarship in 1994. His scholarship is awarded to music students demonstrating academic strength and financial need. He additionally has supported Valley Musica, the annual Harrisburg Symphony Orchestra July 4 concert on campus, and multiple capital projects. These gifts have enriched the program he loves and granted him membership in the College's Lifetime Vickroy Society.

Jerry also included a provision in his will to further support the Music Department and his endowed scholarship. This ultimate act of generosity has earned him membership in the College's Miles Rigor Society.

By endowing a scholarship in his lifetime, Jerry is able to attend LVC's annual Scholarship Luncheon in order to meet the students-like Laura Brent '18-who benefit. He is thankful that through his will, his scholarship may grow to support multiple students each year.

After earning his degree at LVC, Jerry earned a master of music from Temple University and became a music teacher in the Conestoga Valley School District, becoming head of music when the Conestoga Valley jointure was formed in 1958. Jerry was an innovative educator and brought the first professional "Music to our Schools" program to the district and intermediate unit. He has also served his community as a member of the board of directors for the Reading Musical Foundation, the Reading Symphony Orchestra, and the Berks Art Council.

Generations of alumni and friends like Jerry have helped make dreams a reality for many students-students who have and will continue to become graduates of Lebanon Valley College's nationally recognized music program.