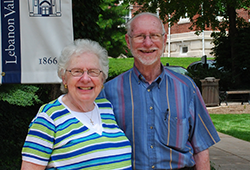 Planning for The Valley's Greatest Needs

Rev. Joseph Dietz '60 and Shirley Dietz '61 got their start at Lebanon Valley College in more ways than one. Now, they've decided to recognize the institution that provided a solid foundation for their lives by supporting the next generation of students at The Valley. The Dietzes have made provisions for the College in their will.

"People who cared," defined Joe and Shirley's experiences at LVC. From finding helpful professors to finding each other, the pair developed a multitude of connections at LVC. As a music education major, Shirley appreciated the individual attention from professors that led to her future employment as an educator, choir director, and organist. The couple developed a varied skill set, Joe majoring in chemistry with minors in religion and philosophy, and Shirley learning an array of instruments, particularly organ.

When asked of their motivation for giving, Shirley stated that, "We want to help other people realize their dreams." Loyal contributors to The Valley Fund, Joe and Shirley made provisions in their wills to provide for The Valley's greatest needs in the future. The Valley Fund directly supports services and opportunities that students depend on daily-generous scholarships, inspiring faculty, and enriching educational resources and programs.

The pair has certainly realized their dreams. Joe, ordained as a reverend in 1994, ended up in a line of work that was a far cry from chemistry. Now, after serving at several churches throughout Pennsylvania, Joe knows he has found his calling. He recently celebrated the 20th anniversary of his ordination to the Sacred Order of Deacons in the Episcopal Church. Shirley taught for several years and then retired to take care of their grandchildren. She continues to serve as the organist and choir director for their church in Pottstown.

LVC was "one big family" for Joe and Shirley, and that family now extends to the students who are benefitting from their generosity and achieving their own dreams. The Dietzes are excited to help the next-and future-generations of LVC students follow their personal goals and, expand their "family" as well.